Don’t see what you’re looking for? We are continually expanding our CRISPR product line, and we may have what you need. If you are interested in custom libraries, other CRISPR enzymes, formulations, or other CRISPR tools, contact our CRISPR experts today to discuss customized solutions for your research: CRISPR@idtdna.com.

Which Cas9 enzyme to use 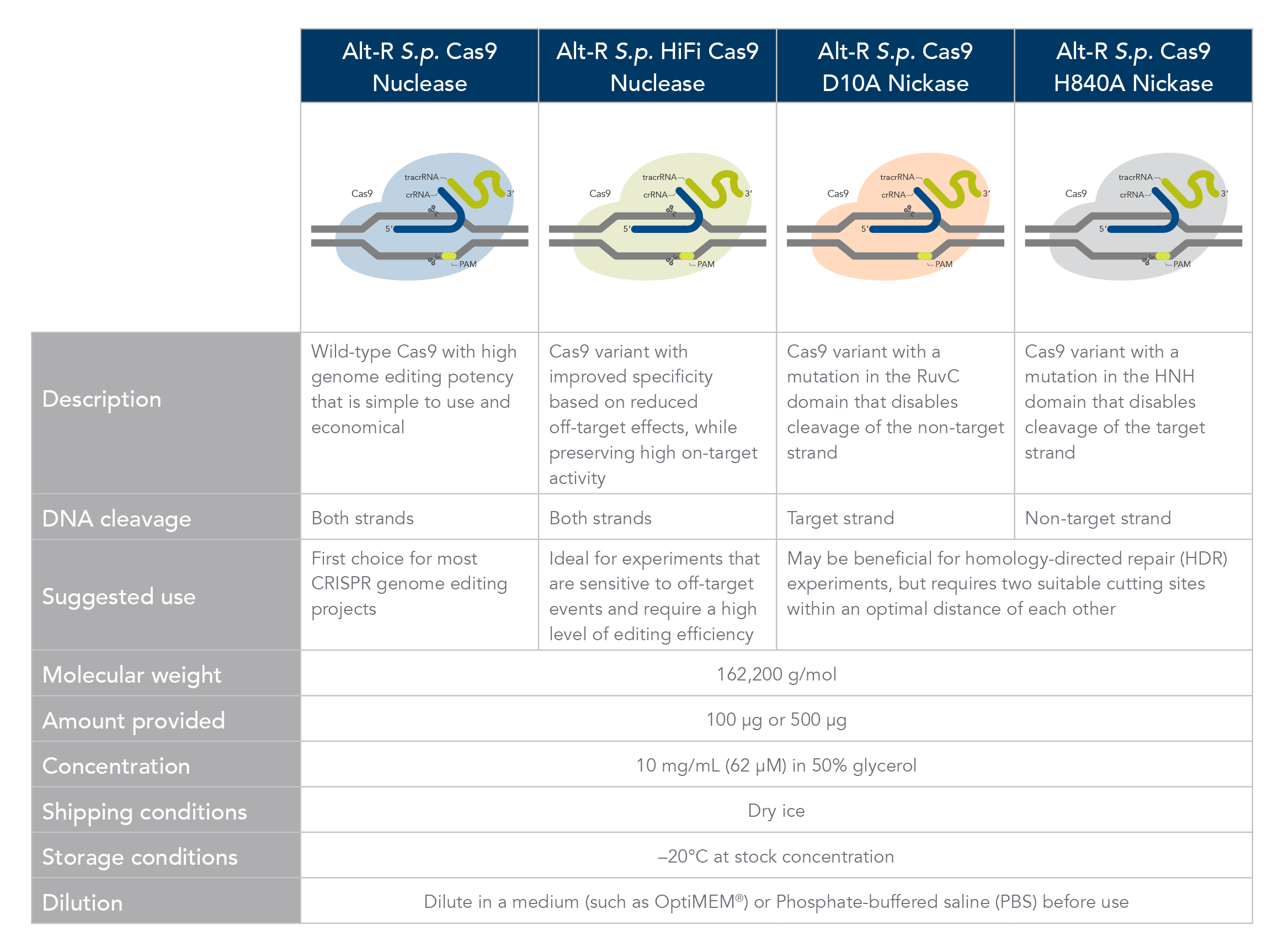 Alt-R S.p. Cas9 Nuclease V3 is the standard Cas9 used for general genome editing. It is a high purity, recombinant S. pyogenes Cas9. The enzymes include nuclear localization sequences (NLSs) and C-terminal 6-His tags. The S. pyogenes Cas9 enzyme must be combined with a gRNA to produce a functional, target-specific editing complex. For the best editing, combine the Alt-R S.p. Cas9 Nuclease V3 enzyme with Alt-R CRISPR gRNA in equimolar amounts.

The Alt-R S.p. Cas9-GFP V3 and S.p. Cas9-RFP V3 nucleases are high purity, recombinant S. pyogenes Cas9 enzymes that are expressed as fusion proteins with nuclear localization sequences (NLSs) and C-terminal 6-His tags. These enzymes have on-target functionality comparable to wild-type S.p. Cas9 and are designed for applications that require post-transfection visualization of the protein or enrichment of edited cells using fluorescence-activated cell sorting (FACS). These enzymes should be combined with Alt-R CRISPR gRNA in equimolar amounts.

Cas9 nickases allow specific cutting of only one strand at the DNA target site. Cuts to both strands of DNA are accomplished by using either Alt-R S.p. Cas9 D10A Nickase V3 or Alt-R S.p. Cas9 H840A Nickase V3, with two gRNAs that target two neighboring Cas9 sites, one on either strand of the target region. There are two main reasons to consider using nickases. First, the use of two neighboring gRNAs instead of one gRNA (as used with Alt-R S.p. Cas9) can decrease off-target effects. Second, the rate of HDR is increased. For more information about using Cas9 nickases, see the application note.

Alt-R S.p. dCas9 Protein V3 has mutations that result in the loss of nuclease activity. This protein can form RNP complexes with Alt-R gRNAs and bind to the target region specified by the gRNA without cutting the DNA. The primary use of dCas9 protein is to block transcription at a specific site on the genome. This is known as CRISPRi and is an alternative to RNAi for knockdown instead of knockout of genes.

Like the other Alt-R enzymes, Alt-R S.p. dCas9 Protein V3 is provided as 10 mg/mL in 50% glycerol, and it can be diluted in PBS or Opti-MEM media before use.

Alt-R A.s. Cas12a (Cpf1) Nuclease V3 enzyme is a high purity, recombinant Acidaminococcus sp. BV3L6 Cas12a. It is useful for targeting AT-rich regions when the Cas9-specific PAM sequence (NGG) is not available. The enzymes include nuclear localization sequences (NLSs) and C-terminal 6-His tags. The Cas12a enzyme must be combined with a gRNA to produce a functional, target-specific editing complex. For the best editing, combine Alt-R A.s. Cas12a (Cpf1) Nuclease V3 enzyme with optimized Alt-R CRISPR-Cas12a (Cpf1) crRNA in equimolar amounts.

Attention: Unlike S. pyogenes Cas9, which cleaves most NGG PAM sites to some degree, some of the tested TTTV sites show no cleavage by A.s. Cas12a nuclease. We recommend using positive control crRNAs to establish that your cells can be edited by Cas12a. In addition, we suggest testing 3 or more crRNAs per target gene.

This comparison table is available for download (see page 2). 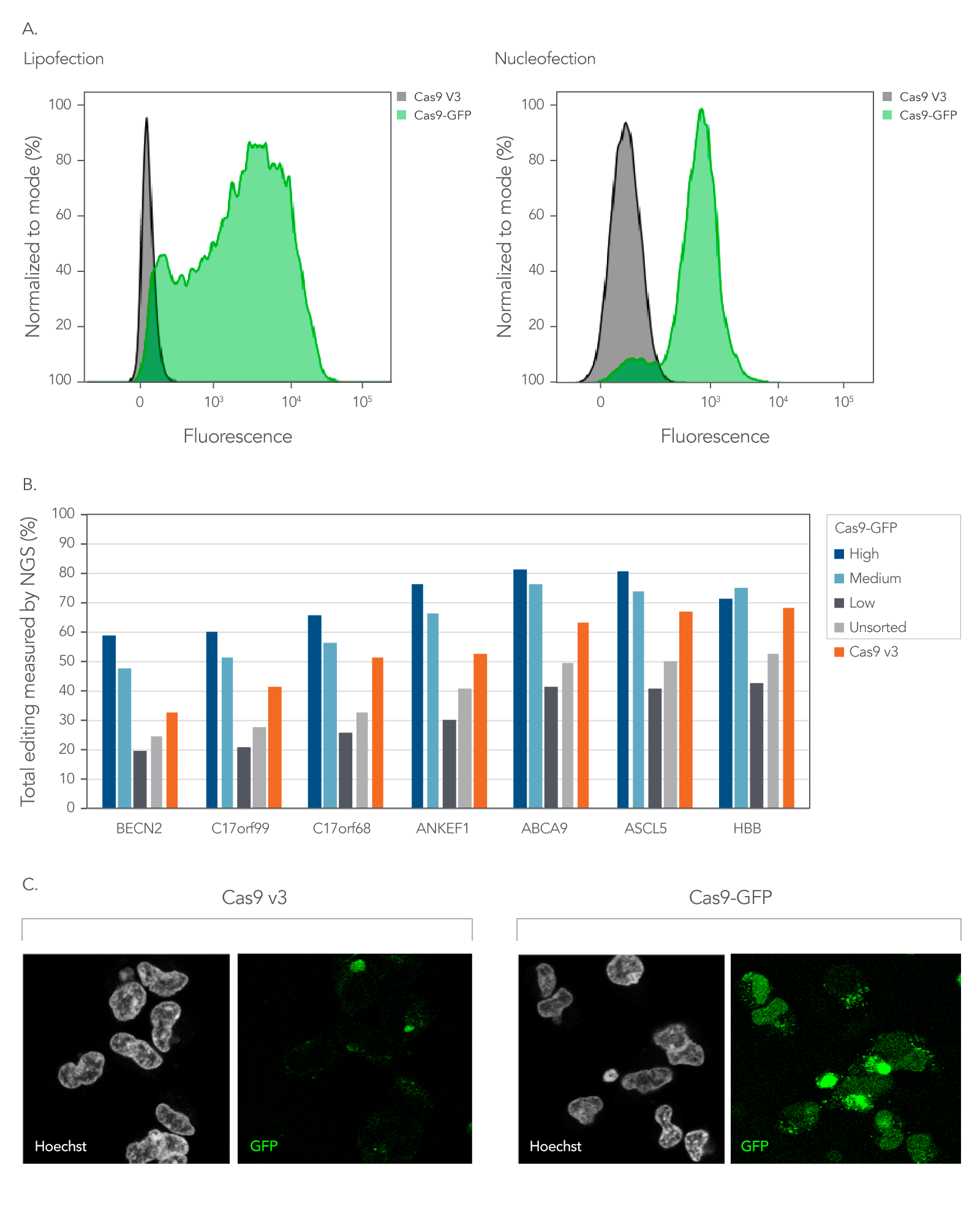 Figure 5. Fluorescent CRISPR proteins can be used to enrich for edited cells by fluorescence activated cell sorting. (A) RNPs consisting of either Cas9-GFP or Cas9 V3 complexed with CRISPR-Cas9 sgRNAs targeting two sites in the HPRT gene were delivered into HEK293 cells using either Lipofectamine™ RNAiMAX (Thermo Fisher) at 10 nM RNP or using a Nucleofector™ system (Lonza) at 2 µM RNP. The graphs show the GFP signal versus cell count, where cell count has been normalized to the mode for cells that had either Cas9-GFP or Cas9 V3 delivered using either lipofection or Nucleofection™. (B) Alt-R CRISPR-Cas9 sgRNAs were designed to target NGG PAM sites throughout the human genome. Guides were complexed with either Cas9-GFP or Alt-R Cas9 V3. RNPs were delivered into HEK293 cells using Lipofectamine™ RNAiMAX at 10 nM final concentration. After ~18 hrs, cells were sorted using a FACSAria™ II (Becton Dickinson) cell sorter into three subpopulations, GFP High: top 20%, Medium: 80–60%, and Low: Bottom 60% of cells based on GFP signal. Cells were then replated, and genomic DNA was isolated after 48–72 hrs. Editing was analyzed by NGS, N=1. (C) Confocal images of HEK293 cells taken approximately 18 hours after delivery of either Cas9-GFP or Alt-R Cas9 V3 protein complexed with Alt-R CRISPR-Cas9 sgRNA delivered by Nucleofection™ at 2 µM RNP. Prior to imaging, live cells were incubated with Hoechst 33342 and washed with PBS. Cells were imaged in complete media in a chambered coverglass using a Leica SP8 confocal microscope. 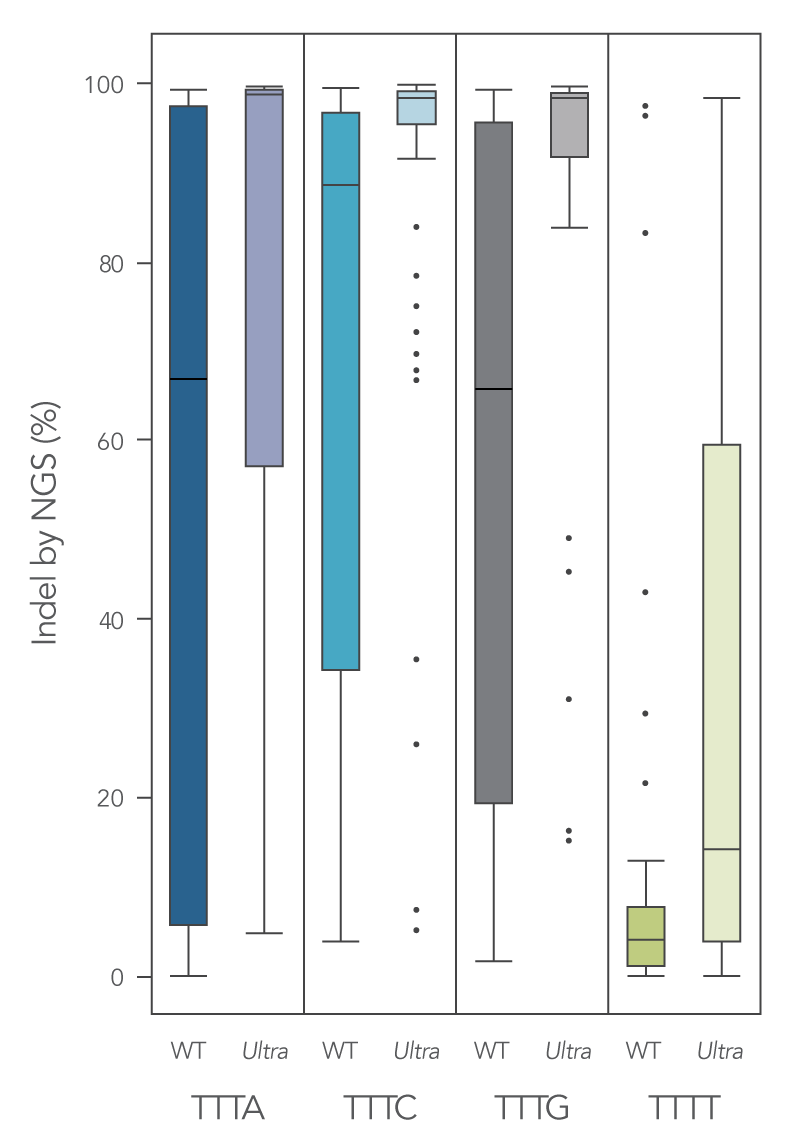 Figure 6. New A.s. Cas12a (Cpf1) Ultra exhibits increased genomic editing efficiency in Jurkat and HEK-293 cells. Ribonucleoprotein (RNP) complexes were formed with wild type (WT) or Alt-R A.s. Cas12a (Cpf1) Ultra (Ultra), combined with crRNAs synthesized for 120 genomic loci to be delivered in Jurkat cells and 96 genomic loci to be delivered in HEK-293 cells. RNP complexes (4 μM) were delivered into Jurkat and HEK-293 cells via a Nucleofector™ system (Lonza) in the presence of Alt-R Cas12a (Cpf1) Electroporation Enhancer. Genome editing efficiencies were determined by target amplification followed by next generation sequencing on an Illumina instrument. The Cas12a-associated PAM sequences are indicated below the graph. N=426, with 213 data points for WT and 213 data points for Cas12a Ultra. Each dot represents a single sample.

Improved enzymes: All Alt-R enzymes [Cas9 nuclease, HiFi Cas9 nuclease, Cas9 nickases, and Cas12a (Cpf1) nuclease] have recently been further optimized to deliver the most trusted results in your research. The latest versions (Alt-R S.p. Cas9 Nuclease V3 and A.s. Cas12a (Cpf1) Ultra) can be directly substituted into the protocols in place of the prior Alt-R enzymes. 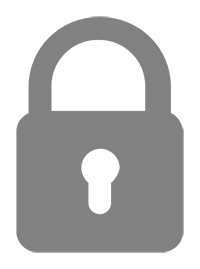 Everything you need to know about CRISPR, from A to Z, for beginners as well as advanced users.