Gene expression is the conversion of heritable, genetic information into RNA or protein. Temporal and spatial differences in gene expression are important measures for understanding biological systems, including normal development and disease progression. 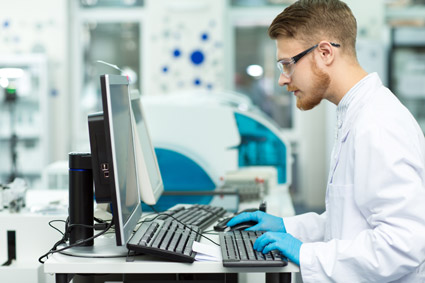 What is gene expression?

What is gene expression analysis?

Gene expression analysis quantifies either messenger RNA (mRNA) levels or non-translated, functional RNA transcription levels in a cell. Whether an RNA is translated into protein or used directly in the cell, RNA transcript levels can provide important insights into how a cell or cells are functioning.

Linking the expression of genes of interest to a biological process or phenotype helps scientists understand gene function, biological pathways, and the genes that regulate development, cell behavior and signaling. The gene expression patterns, or “gene signatures”, associated with a biological state can serve as biomarkers for that condition. Determining changes in gene activity resulting from environmental and physical alterations can be used to generate hypotheses regarding diverse biological processes. These investigations can facilitate research efforts to develop novel solutions for diverse biological challenges. In agriculture, for example, changing expression levels can identify environmental conditions under which crops are induced to thrive, become susceptible to disease or pests, or environmental conditions that stress crop growth and development.

How is gene expression measured?

Measuring gene expression has traditionally involved isolating an intact RNA fraction from samples, immobilizing it, and quantifying the RNA transcripts of interest. This is usually done using a transcript-specific, labeled probe in a technique known as northern blotting. Gene expression analysis techniques that use this approach have been limited by their ability to study only a few transcripts per experiment. Other techniques include dot blotting, ribonuclease protection assays (RPAs), serial analysis of gene expression (SAGE), and differential or subtractive hybridization.

One of the most widely used methods for analyzing gene expression is qPCR, also called real-time PCR. qPCR is performed as a one step or two step process. One‑step qPCR requires converting the RNA into DNA (called cDNA), then measuring the resulting cDNA concentration. All of this is done in a single tube. Two‑step qPCR also requires the RNA to be reverse transcribed into cDNA, using a reverse transcriptase, and then the cDNA is transferred into a separate tube for a subsequent qPCR reaction.

IDT offers a selection of qPCR reagents for gene expression analysis. Order ready-to-use PrimeTime™ qPCR Assays or you can design your own custom assay. Both probe-based and intercalating-dye based options are available.

PrimeTime qPCR Primer Assays for use with intercalating dyes, such as SYBR® Green dyes*, include predesigned primer sets for human, mouse, or rat sequences. Custom assays may be created for all other species using the PrimerQuest™ Tool. Predesigned and custom assays can be provided in tubes or plates.

* SYBR is a trademark of Thermo Fisher Scientific

PrimeTime qPCR probes are customized to your specifications and include several probe types, including PrimeTime double-quenched probes, Affinity Plus LNA Probes, and molecular beacon probes. Additionally, MGB Eclipse® Probes (EliTech Group) and other probe types are available as GMP-compliant reagents.

*MGB Eclipse is a registered trademark of ELITech Group
** GMP refers to product manufactured in accordance with IDT’s ISO 13485: 2016 QMS

*RUO—For research use only. Not for use in diagnostic procedures. Unless otherwise agreed to in writing, IDT does not intend for these products to be used in clinical applications and does not warrant their fitness or suitability for any clinical diagnostic use. Purchaser is solely responsible for all decisions regarding the use of these products and any associated regulatory or legal obligations.